The fisrt idea was appearing in ICSA 2014. In the paper[1], the author showed an phenomenon that by repeatedly accessing one row in cache, the bit in nearby rows may by flipped.

In the architecture of CPU, each cell lies at the intersection of two perpendicular wires: a wordline and a bit line.
An access to a rank occurs in three steps: (i) “opening” the desired row within a desired bank, (ii) accessing the desired columns from the row-buffer, and (iii) “closing” the row.
Since the charge stored in a DRAM cell is not persistent, charge in a cell needs to be refreshed after a period of time. On most architecture, the refresh time window is 64ms.

In general, disturbance errors occur whenever there is a strong enough interaction between two circuit components (e.g., capacitors, transistors, wires) that should be isolated from each other. Depending on which component interacts with which other component and also how they interact, many different modes of disturbance are possible.

Among them, the author identifies one particular disturbance mode that afflicts commodity DRAM chips from all three major manufacturers. When a wordline’s voltage is toggled repeatedly, some cells in nearby rows leak charge at a much faster rate. Such cells cannot retain charge for even 64ms.

The next problem is how to use a memory fault to launch a successful exploit.
Memory Corruption
Through corrupting the value of a pointer, the bit flip may cause a vulnerability similar to out-of-bound read/write.
A similar side channel attack was proposed in academic paper in 2003 [2]. The bit flip induced by cosmic ray is used for attacking virtual machine.

Linux kernel privilege escalation
Privilege escalation in 7 easy steps
1. Allocate a large chunk of memory
2. Search for locations prone to flipping
3. Check if they fall into the “right spot” in a PTE for allowing the exploit
4. Return that particular area of memory to the operating system
5. Force OS to re-use the memory for PTEs by allocating massive quantities of address space
6. Cause the bitflip – shift PTE to point into page table
7. Abuse R/W access to all of physical memory
In practice, there are many complications

In the original rowhammer attack, the attacker needs to use/generate native code, such as CLFLUSH to repeatedly read value in memory. However, in most attacking scenarios of RCE, attackers cannot get such ability to use native code in the local machine. One way is to use provided script language to achieve same functionality. 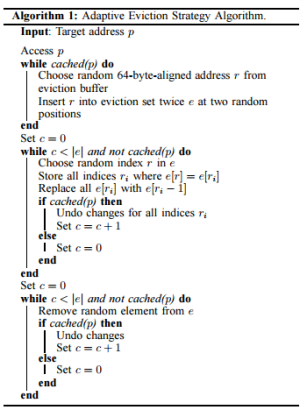 cached(p) function tries to evict using the current eviction set and decides whether an access was cached or not based on the access time.

M. Seaborn found on all test machines a significantly higher probability for bit flips in a row N when hammering its neighbor rows N − 1 and N + 1. This technique is dubbed “double-sided hammering”.

The eviction sets are precomputed in the f_evist and s_evict using physical address mapping.

The author observed that large typed arrays in JavaScript in all recent Firefox and Google Chrome versions on Linux are allocated 1MB aligned and use anonymous 2MB pages when possible.

The author reproduced bit flips with Javascript in Firefox and Chrome. The author built a tool which monitors the virtual address space of Firefox. Each time a 2MB page is allocated they store the virtual address and the time difference to the last allocation. This way they can detect the beginning of the allocation in JavaScript. In a second step, they build an inverted page table for the Firefox process. They then resolve the physical addresses they want to hammer to offsets within the JavaScript array. These offsets are then pasted into a field in the webpage to start hammering on the JavaScript array.

Launching script-based side-channel attack has always been a hot topic in attacking techniques. In this paper, the author proposed a Javascript-based attack to trigger hardware fault with the same effect as native code.

This site uses Akismet to reduce spam. Learn how your comment data is processed.